Toyota Motor North America and Kenworth Truck Company are proud to announce they have proven the capabilities of their jointly designed heavy-duty, Class 8 fuel cell electric vehicles (FCEVs) as a potential zero-emissions replacement of diesel-powered trucks with the completion of their operations in the Zero- and Near-Zero Emissions Freight Facilities (ZANZEFF) “Shore to Store” project at the Port of Los Angeles, the Los Angeles basin, and the Inland Empire. 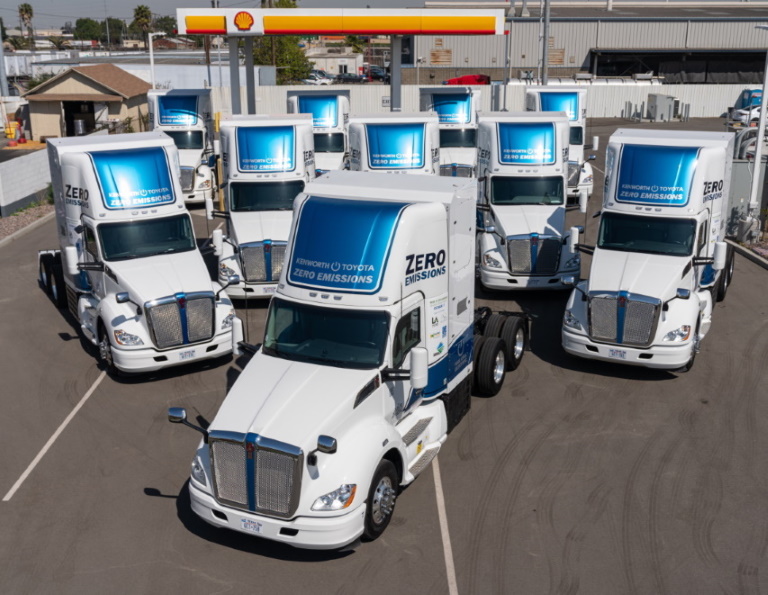 The primary goal for Toyota and Kenworth’s participation in the project was to nearly match the performance of diesel-powered drayage trucks while eliminating emissions to provide a sustainable solution in heavy-duty transportation. The baseline for the Toyota-Kenworth T680 FCEV truck – codenamed “Ocean” – was a 2017 diesel engine operating about 200 miles a day. The T680 FCEV has a range of about 300+ miles when fully loaded to 82,000 lbs. (GCWR), and with no downtime between shifts for charging and the short 15- to 20-minute fill time, the FCEVs could run multiple shifts a day and cover up to 400 to 500 miles. Kenworth designed and built the Class 8 T680 FCEVs, while Toyota designed and built the powertrain’s fuel cell electric power system powered by hydrogen. The Ocean trucks reduced Greenhouse Gases (GHG) by 74.66 metric tons of CO2 per truck annually compared to the baseline diesel engine.

The success of the 10 trucks in serving real-world customers was a result of close collaboration among diverse project members, including Kenworth and Toyota, The Port of Los Angeles as the project lead, Shell for hydrogen fuel infrastructure, and a grant from the California Air Resource Board (CARB). The program paves the way for further development and commercial opportunities for hydrogen-powered fuel cell electric transportation in California and beyond. Although the overall ZANZEFF project is anticipated to conclude later this year, the recently concluded “Shore to Store” project funded under ZANZEFF was proposed with support from Toyota, Kenworth and Shell and funded with a $41 million grant awarded by CARB.

"Having a successful demonstration of Toyota's scaled fuel cell electric power supply with real-world operations for actual customers opens the door to even broader future deployment, as the use of hydrogen helps to eliminate CO2 from heavy-duty transport while offering a cleaner alternative that keeps the vehicles in service, a win for all parties," said Andrew Lund, Toyota chief engineer, zero emission advanced product planning. "The potential for this technology as a replacement for higher-emission powertrains is real and supports both regulatory and society iniatives to combat climate change while helping us achieve our own goals of carbon neutrality." 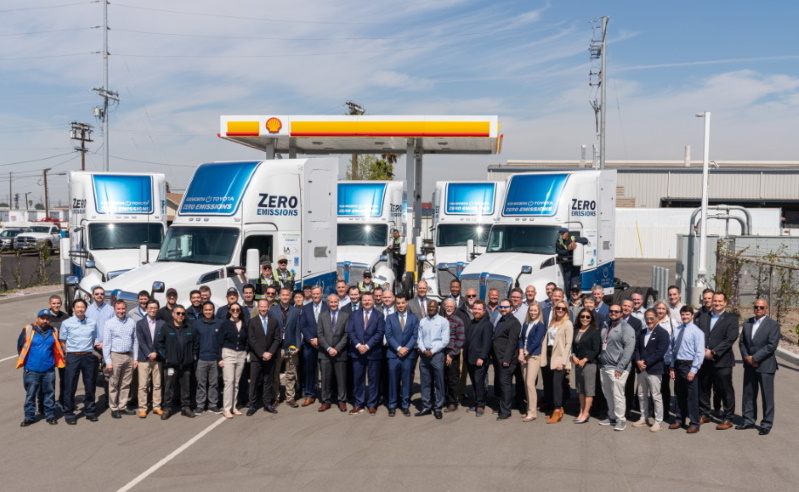 "Through the Shore to Store project, we demonstrated how Toyota's advanced zero-emission hydrogen fuel cell technology could be scaled and used in our Kenworth T680,” said Joe Adams, Kenworth chief engineer. ”We clearly showed that hydrogen is a viable clean fuel capable of powering commercial transportation for customers, matching diesel performance in range and power, with quick refueling for minimal downtime and smooth, quiet operation."

Although the overall ZANZEFF project is anticipated to conclude later this year, the recently concluded “Shore to Store” project funded under ZANZEFF was proposed with support from Toyota, Kenworth and Shell and funded with a $41 million grant awarded by CARB. The grant was part of the California Climate Investments, a California initiative that puts billions of cap-and-trade dollars to work reducing greenhouse gas emissions, strengthening the economy, and improving public health and the environment. ZANZEFF S2S provided one of the largest real-world, proof-of-concept test cases to show the practical application of hydrogen-powered fuel cell technology at scale in a framework for freight facilities to structure operations for future goods movement from the “Shore to the Store” in the world. 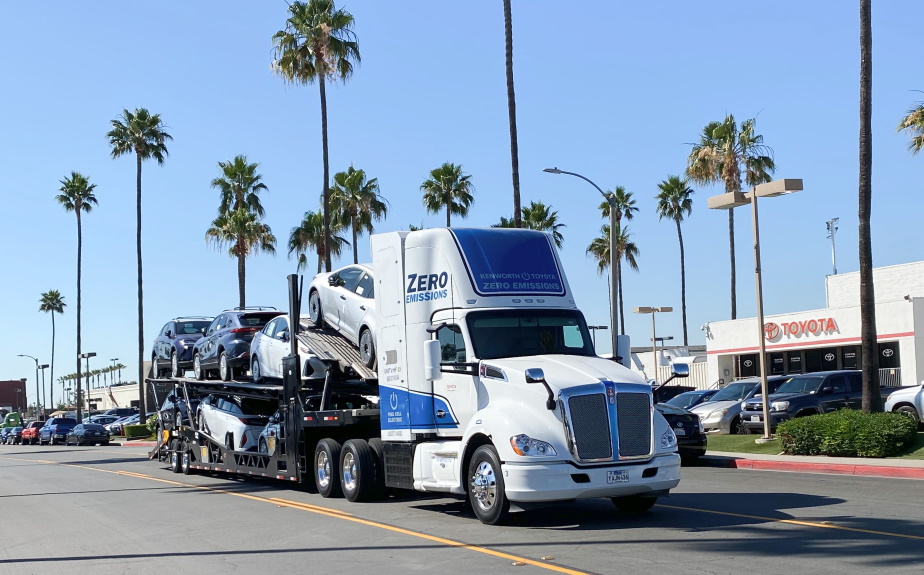 The 10 “Ocean” trucks for this project were operated by customers, including, among others, Toyota Logistics Services, Total Transportation Services, Inc., and Southern Counties Express. With the completion of this project, the door is now open for the technology to be adopted more widely for use in other heavy-duty applications, including increasing use of heavy-duty trucks in commercial transportation. 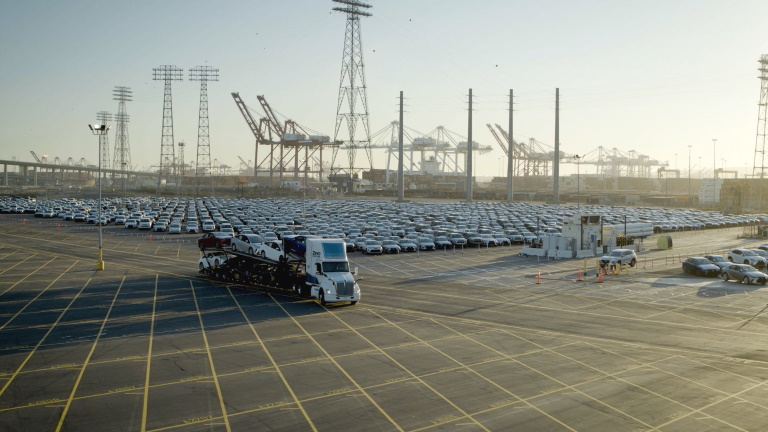 The Port of Los Angeles is the busiest container port in North America. The medium-duty and heavy-duty trucks across the state – like those in operation at the Port – only constitute about 3 percent of total vehicles in California, yet they are responsible for roughly 23 percent of the state’s on-road Greenhouse Gas Emissions. The Port of Los Angeles has announced that it hopes to transition drayage fleets to zero-emission powertrains by 2035 and recently announced the Clean Truck Fund to help support this transition. The port and the surrounding region were an ideal location to demonstrate the fuel cell electric heavy-duty trucks as part of transport operations.

"Collaborating with original equipment manufacturers like Toyota and Kenworth on this demonstration project is an important step toward bringing next-generation technologies to market," said Port of Los Angeles Executive Director Gene Seroka. "We're grateful to CARB for its generous grant to support this effort and look forward to additional zero emission vehicles operating at the Port of Los Angeles." 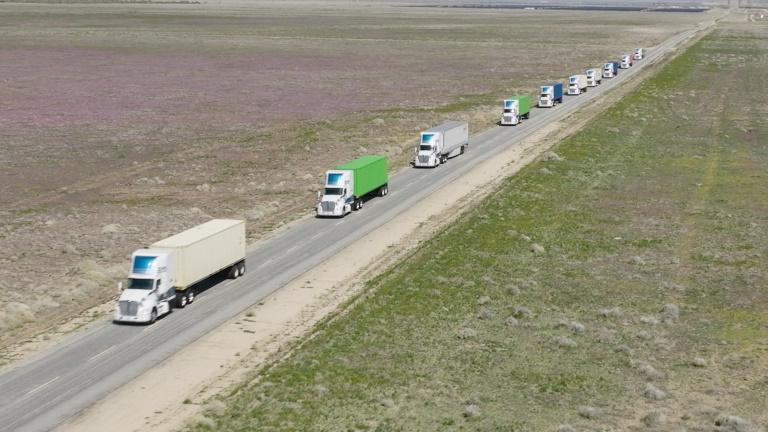 Shell contributed to the project by building a total of three hydrogen stations (two ZANZEFF and one additional in the operating region), the first public provider in California to fuel heavy-duty trucks. With the set routes for the trucks’ drayage operations, the stations were regularly used, providing quick refueling to keep the trucks in operation.

“Shell anticipates a great use-case for hydrogen in Commercial Road Transport here in California and the success of the ZANZEFF project has been an important step in achieving commercialization," said Wayne Leighty, Shell Hydrogen Mobility, Commercial Head, North America. "Collaborations across both the private and public sectors is key to advancing zero-emissions heavy-duty mobility, and we are grateful to CARB, Port of Los Angeles, and ZANZEFF members for their support.” 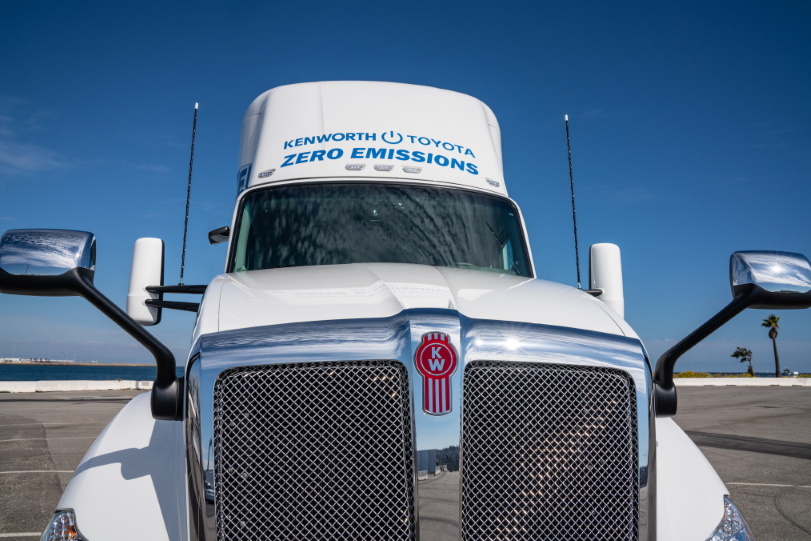 About Toyota
Toyota (NYSE:TM) has been a part of the cultural fabric in the U.S. for more than 60 years, and is committed to advancing sustainable, next-generation mobility through its Toyota and Lexus brands, plus its nearly 1,500 dealerships.

Toyota directly employs more than 39,000 people in the U.S. who have contributed to the design, engineering, and assembly of nearly 32 million cars and trucks at its nine manufacturing plants. By 2025, Toyota’s 10th plant in North Carolina will begin to manufacture automotive batteries for electrified vehicles. With more electrified vehicles on the road than any other automaker, a quarter of the company’s 2021 U.S. sales were electrified.

To help inspire the next generation for a career in STEM-based fields, including mobility, Toyota launched its virtual education hub at www.TourToyota.com with an immersive experience and chance to virtually visit many of our U.S. manufacturing facilities. The hub also includes a series of free STEM-based lessons and curriculum through Toyota USA Foundation partners, virtual field trips and more.

About Kenworth
Kenworth Truck Company is the manufacturer of The World’s Best® heavy and medium duty trucks. The Kenworth T680 FCEVs are an important element of the industry-leading Kenworth Driving To Zero Emissions™ program (www.kenworth.com/innovation/zero-emissions).

Kenworth's Internet home page is at www.kenworth.com. Kenworth is a PACCAR company.

About The Port of Los Angeles
The busiest seaport in the Western Hemisphere, the Port of Los Angeles is North America’s leading trade gateway and has ranked as the number one container port in the United States for 22 consecutive years. In 2021, the Port facilitated $294 billion in trade and handled a total of 10.7 million container units, the busiest calendar year in the Port’s 115-year history. San Pedro Bay port complex operations and commerce facilitate one in nine jobs across the Southern California counties of Los Angeles, Orange, Riverside, San Bernardino and Ventura.