It's been almost six years since Ozinga Ready Mix Concrete Inc. has replaced the mixer trucks working from its Chinatown Plant near downtown Chicago. So, after careful consideration of the business environment and changing regulations, company officials decided that Kenworth's compressed natural gas-powered mixers were the best fit. 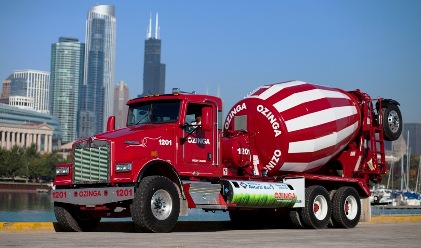 "We looked at what we wanted to accomplish - reduce our country's dependence on foreign oil, improve our company's environmental image by cleaning up emissions from our mixers and lower our fuel costs," said Tim Ozinga, director of corporate communications for Ozinga Ready Mix Concrete. "Since city officials are trying to reduce emissions from trucks that operate in downtown Chicago, we thought placing all of our new CNG trucks in operation there would have the greatest impact." 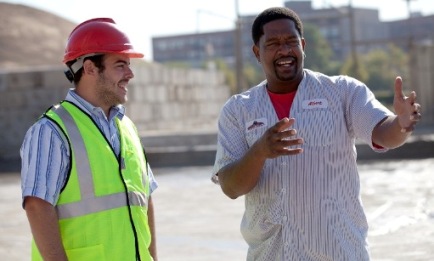 That's why Ozinga bought 13 compressed natural gas-powered Kenworth W900S mixers and assigned them to its ready-mix concrete plant on South Lumber Street and West 22nd Place near the Dan Ryan Expressway. One of the fleet's W900S mixers was recently featured in the Kenworth Truck Co. booth at this year's World of Concrete trade show in Las Vegas. The company has plans to install a time-fill fueling station at the Chinatown plant eventually as it replaces more of its diesel-powered mixers with new Kenworth CNG-powered units. 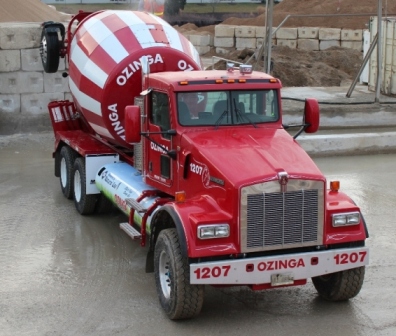 Ozinga Ready Mix Concrete is a subsidiary of Ozinga Brothers Inc, a fourth-generation, family-owned concrete company founded in 1928 and based in Chicago. It provides ready-mix concrete from 27 plants for residential and commercial building and public projects throughout the Chicagoland area and in northwest Indiana. Ozinga Bros. also provides bulk transportation services. 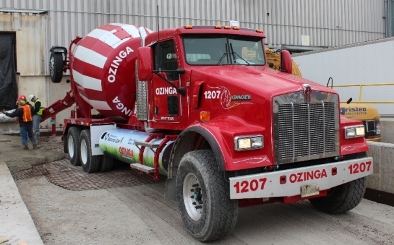 All 13 of Ozinga's CNG-powered Kenworth mixers were delivered from October to December 2011 and are now in operation. Each is equipped with the 8.9-liter Cummins Westport ISL G engine, 6-speed Allison 4500RDS automatic transmission and the McNeilus Bridgemaster mixer body. Rated at 320 hp and 1,000 lb-ft of torque, the ISL G uses a maintenance-free, three-way catalyst and is 2010 EPA and CARB compliant without the use of selective catalytic reduction (SCR) technology or a diesel particulate filter (DPF). 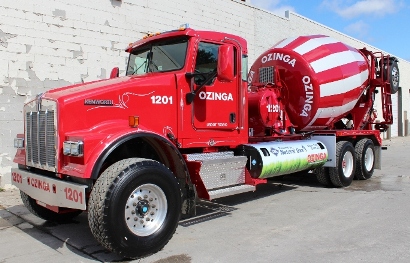 Though environmental stewardship played a significant role in deciding to buy natural gas-powered trucks, Pete Huisenga, fleet manager at Ozinga, said the decision to choose Kenworth Truck Co. as the manufacturer of the CNG trucks was greatly influenced by Ozinga's 15-year experience with the reliability and performance of its diesel-powered Kenworths. 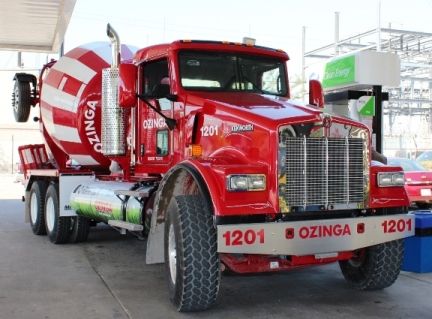 "We've found that Kenworth makes trucks that can hold up well in the kinds of environments we operate," Huisenga added. "We've also been pleased with the support that Central Illinois Trucks (Ozinga's local Kenworth dealer) has provided to us over the years." After a few months, results of the new Kenworth CNG mixers have met and exceeded the expectations of company managers and drivers, Huisenga said.

"Drivers have told us that they're responsive, shift fast and provide good power," he added. "They also tell us the engines are remarkably quiet and the truck interiors are very comfortable." 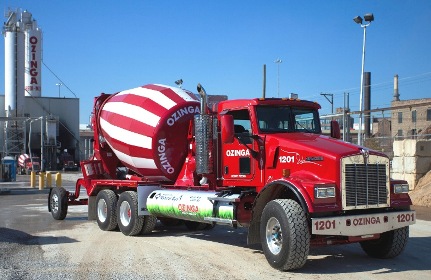 The CNG-fueled Kenworth trucks' engines are 5-1/2 decibels quieter than comparable diesel-powered 2007 Cummins engines at peak torque and load and nearly 10 decibels quieter at idle, according to the engine's manufacturer, Cummins Westport Inc. Huisenga said customers have already commented about the quietness. And that has significant benefits when placing concrete in residential neighborhoods and at public projects like the new Metra station at Comiskey Park, and the rebuild of Wacker Drive's lower and upper decks, he added. 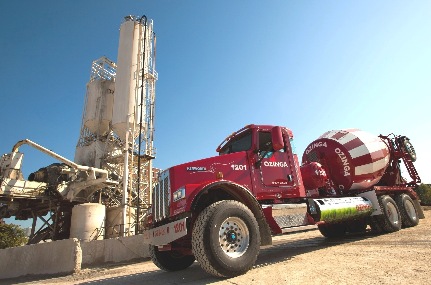 "We've also noticed a huge difference in the appearance of the engine exhaust pipes," Huisenga noted. "The insides of the pipes are still clean and shiny with no visible soot."

Replacing diesel-powered trucks with natural gas-powered units that carry a higher price for the new technology might seem counterintuitive in today's difficult economy, particularly given that more than 50 percent of Ozinga's business comes from residential rehabilitation and construction projects. But Ozinga said that's not the case at all. 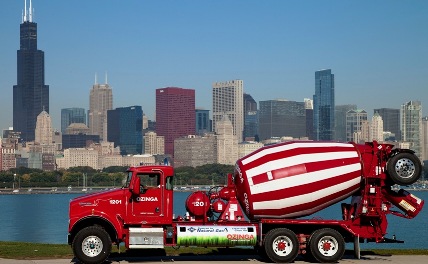 First, the cost of natural gas has been consistently less than the cost of diesel, about $1.50 less per diesel gallon equivalent, he said. That means the company can expect fuel cost savings to repay the additional cost of the natural gas technology on each of the trucks within 2-1/2 years. Once the company installs its fueling station, the payback for the station and the trucks will take much longer, Ozinga said. But company executives still see the entire effort as a greater opportunity to position the company as being an environmentally responsible leader in the Chicago area market.

"More and more homeowners and small businesses are looking to source their concrete from companies that can demonstrate a commitment to a greener operation," Ozinga said. "Contractors are also looking for suppliers who can help them with improving their chances for meeting certification requirements for the Leadership in Energy and Environmental Design (LEED) Green Building Rating System." LEED is a third-party certification program and nationally accepted benchmark for the design, construction and operation of high-performance green buildings.

Ozinga said company executives are pleased to hear that the natural gas-powered trucks are working well for the company. 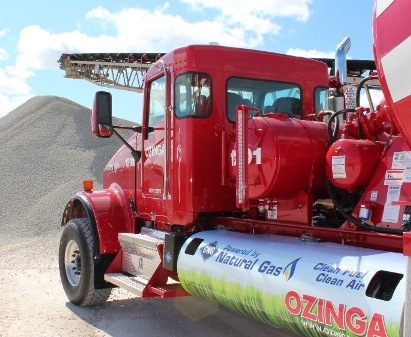 "It's good to know that the Kenworth CNG mixers not only pay back in fuel cost savings and driver satisfaction, but also further our environmental stewardship efforts," Ozinga said. "These efforts fit in well with our company's history and heritage of serving the greater needs of our community and our country. We're also pleased that we can take a leadership role. Kenworth and Central Illinois Trucks are certainly making it easier by providing us with quality trucks and quality service support."

The 10-cubic yard concrete mixing drums that Ozinga Ready Mix Concrete Inc. operates have displayed the red and white stripes of the American flag for 66 years.

The red and white color scheme was adopted in 1946 when Richard, Norman and Martin Ozinga Jr. returned after serving in the U.S. Army Air Corps, U.S. Navy, and the U.S. Marine Corps during World War II. Four years prior, the company's operations had shut down when all three brothers left to serve their country. The three brothers' father, Martin Ozinga Sr., started the company in Evergreen Park, Ill., in 1928. He had just handed over the company operation to the three brothers when World War II broke out and delayed the family's plans.

"We've been proud to continue to display our family's history and heritage of serving the needs of our country and our community on our company's mixers," said Tim Ozinga, the company's director of communications and great-grandson of Martin Ozinga Sr.