For Don Luft, looking back makes it easier to look forward.

As an 18-year old, he got his feet wet in the oil and gas well servicing business by driving a Kenworth truck for Nowsco Well Service Ltd.  Over the years, his truck took him into some inhospitable areas of the oil fields; he can even lay claim to being an ice road trucker as he traversed many miles of frozen river and lake roads as well as what seemed like endless miles of frozen muskeg throughout western Northern Canada. He learned that dependability and comfort were the hallmarks to a quality truck. 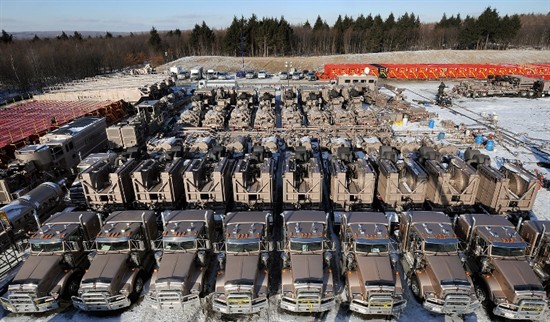 "Life's lessons," said Luft, who 38 years later serves as president and chief operating officer for Trican Well Service Ltd. - one of North America's largest providers of oil and gas pumping services. "When Murray Cobbe and I bought out one of the three partners of Trican in 1996, we took over a small oil field servicing company that had been around since 1979.  But, we knew we didn't want to stay small and in December of that year, we went public to raise capital to grow our business.  We saw a great deal of opportunity outside of where we were headquartered in Lloydminster (on the border of Alberta and Saskatchewan), and diversified into western Canada and internationally.  Over the years, we've invested approximately $2 billion in new equipment and facilities and that investment has paid our shareholders back tremendously.

"We were fortunate to be able to bring along employees that were well-versed in the oil field servicing business. It allowed us to hit the ground running," Luft said.  "We had good technical knowledge; we knew from our own experience how to put together a quality organization with superior customer service; and we knew we had to have top quality equipment to attract quality people. Our formula was to operate quality equipment and hire quality people, which in turn would attract quality customers."

For Luft, who had a long history in operations, including 15 years of truck driving, one of the first orders of business was putting a fleet together.  "When we acquired Trican, the company was using a brand of truck that wasn't going to attract drivers.  We wanted Kenworths and the early history I had with the brand - its reliability and respect amongst drivers - came into play.  We knew the truck was a great well servicing unit.  If I drove a truck, I wanted a real truck.  A Kenworth." 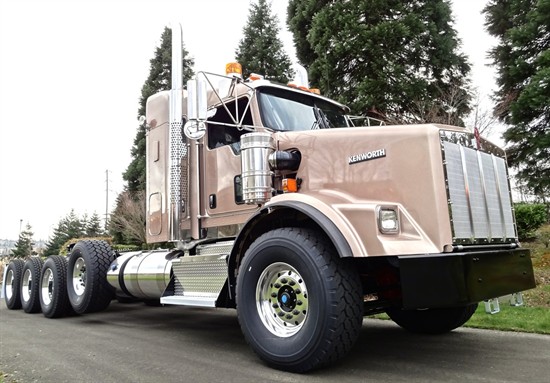 With that, Trican closed its initial truck order with GreatWest Kenworth for W900s and T800s.  Over the years, the T800 became Trican's truck of choice for its excellent versatility, reliability and maneuverability. The latest order for T800s includes 62-inch AeroCab® sleepers. Most are spec'd with 485 to 500-hp Cummins ISX15 engines driven through 18-speed transmissions with tandem drive axles.   Some are shod with tridem drives to tackle the additional weights and traction requirements of the off highway applications including mountainous terrain, snow, ice and mud. 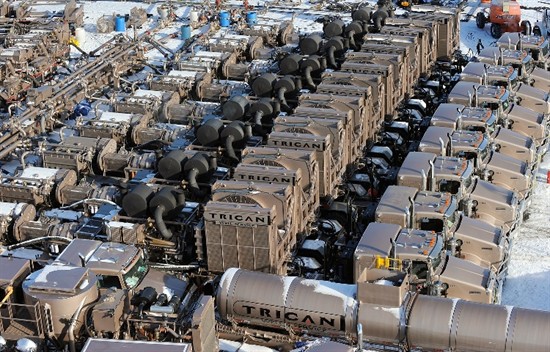 All told, Trican now operates close to 1,500 trucks (along with the workhorse T800, there is a smattering of Kenworth C500s and medium duty trucks) with operations spread throughout Canada, the United States, including Texas, Russia, Kazakhstan, Saudi Arabia, Australia and Algeria.

"In Russia, we're using the C500 in a 6x6 configuration with body-mounted pumpers and tractor services for specialized equipment applications, and we are also using our standard T800 tractors," said Luft.  "In the deserts of Algeria, we're running the T800 with large floatation tires."

According to Luft, some of the Kenworths began their life in North America servicing oil wells before getting transferred overseas, while others were purchased new and shipped over for service. 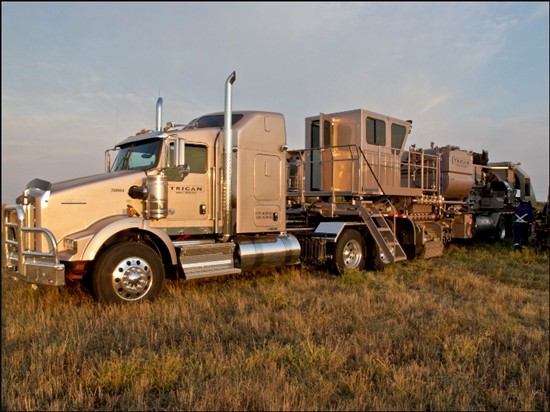 "We're running our Kenworths hard, but they have a long productive life," said Luft. "Our off-road Kenworths will normally put on about 60,000 miles a year, and we keep them up to 15 years.  They'll haul anywhere from 35,000 to 100,000 kilograms (77,000  to 220,000 pounds) gross combination - mostly hauling pneumatic trailers or low boys with fracturing pumps, coil tubing, or other specialized equipment.  Our road tractors typically run double those miles per year and stay on board for 10 years prior to trade in.  How long we keep our Kenworths is really dependent upon the application."

And the fleet looks good. "People see our color - DuPont Imron's Mocha Frost and know it's our truck," explained Luft. "Color selection was very important to us, and I remember flipping through the color samples when we purchased our first Kenworths.  We wanted to stand out and be highly recognizable.  The trucks represent our company.  It's what people see."

What people have been "seeing," but more importantly "receiving" has fueled Trican's business.  "What we feel separates us is our fireman mentality," said Luft.  "Our business is so demanding.  Its 24 hours a day, 7 days a week.  We have to go to work at a drop of a hat.  No excuses. It takes a special breed of truck driver to work with us, and our people are up to the challenge.  We have a very low turnover rate.  I think that goes back to our formula: operate a quality company, using quality equipment and you can hire and retain quality people."

Being named as Oilweek magazine's 2010 Supplier of the Year is testament to that dedication and it's fueled the company's expansion.  "When we bought the company, we had less than 50 people," recalled Luft.  "Today, we're international and have 5,700 employees.  In fact, we're the largest pressure pumping company not only in Canada, but also in Russia."

While much of Trican's growth is organic (growing its current customer base while adding new customers), the company has acquired strategic partners when it makes business sense.  "We moved into Texas in 2007 with the acquisition of Liberty Pressure Pumping, and purchased a private stimulation services company in Oklahoma two year ago," said Luft.  "When we look at acquisitions, we always look at the equipment they're running.  If they're running Kenworths, we consider that a plus and we factor that into our offer.  Trucks do make a difference." 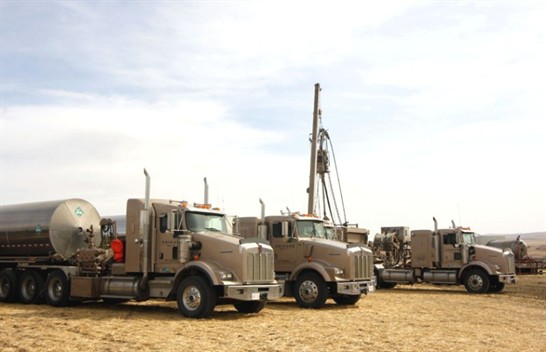 Luft said he still has his class 1 license, something he displays with pride.  "I started as a truck driver and still have driving in my blood," he said.  "I'm very proud of what we've accomplished here at Trican.  We strive to be the best service provider in the industry.  And we feel all of our services - technically and operationally - provides tough competition. Transporting our equipment and our image up and down the roads of the oil patch is an important part of who we are and our drivers require a dependable piece of equipment that they can use and be proud of. It's been an important part of our formula for success." 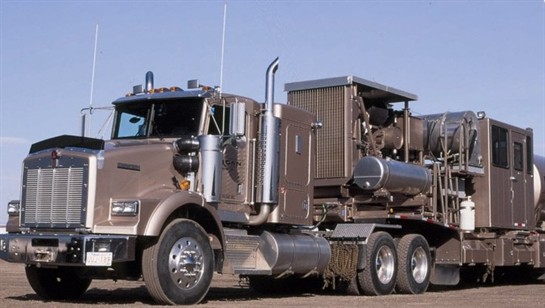 T800 - Trican's Kenworth T800 standard tractors feature Cummins ISX 15 engines, driven through 18-speed transmissions. Axle ratings normally are 14,600 lbs on the front, 46,000 lbs on the rears with the Kenworth AG460 air-ride suspension. The T800s are used as wet kit tractors. They haul frac pumpers, and bulk nitrogen, acid, data and chemical, manifold and iron trailers.  Trican also uses the T800 as coil tubing tractors spec'd with 500 hp engines, 18-speed transmissions, 20,000-lb front axles, 46,000 lb. tandems and 52,000-lb tri-drive rear axles. Some of the tri-drive T800s feature pusher axles and they all come with a factory-installed PTO. The company also uses a T800 dual steer as its 30-ton picker tractor. They feature the company's standard specs, except for a 346-inch wheelbase and dual front axles with a 20,000-lb rating.

C500 - The Kenworth C500 is used in Canada and Russia as a tractor as well as a single "cementer chassis." Delivering cement to cement the casing strings in a well operation, these trucks come equipped with automatic transmissions and straight-through frames with FEPTO. The tractors in Russia are 6x6 configurations as well as 6x4 configurations.

Kenworth Truck Company is the manufacturer of The World's Best® heavy and medium duty trucks. Kenworth is an industry leader in providing fuel-saving technology solutions that help increase fuel efficiency and reduce emissions. The company's dedication to the green fleet includes aerodynamic trucks, compressed and liquefied natural gas trucks, and medium duty diesel-electric hybrids. Kenworth is the only truck manufacturer to receive the Environmental Protection Agency's Clean Air Excellence award in recognition of its environmentally friendly products. In addition, the fuel-efficient Kenworth T700 equipped with the low-emission PACCAR MX engine was named the 2011 Heavy Duty Commercial Truck of the Year by the American Truck Dealers. Kenworth's Internet home page is at www.kenworth.com. Kenworth. A PACCAR Company.