Tracy Bogler remembers the stories. How his grandfather started the family's delivery business with a one horsepower machine. "Well, if you consider horses as machines, you're accurate," said Bogler with a smile. "My grandfather started his delivery business with horse and wagon delivering clay from Chamois, Mo., to Farbar, Mo. - a distance of 107 miles."

In 1926, William Bogler bought a 2-year old chain driven truck, but quickly learned that his horse and wagon could get to Farbar quicker, and more reliably. Back to hay fed transportation versus gas fed he went. Eventually, trucks won out.

As the company diversified in the '30s, adding five trucks and later gaining a milk delivery business, William's son, William Woodrow "Woody" Bogler, joined his dad. "My dad was 15 when he got behind the wheel of a truck making milk runs," said Bogler. "It was a few years before he was supposed to, but he did fine. And, he loved what he was doing. Then, when dad graduated from high school, he went off to fight in Korea. Instead of spending his paychecks overseas, he sent them home to invest in the trucking company. And when he returned home in 1954, he had a nest egg saved and became president of the company." 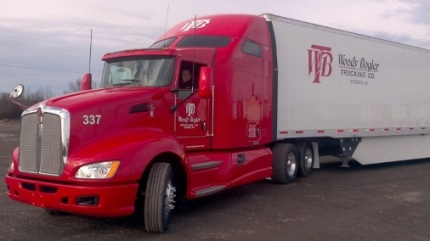 Today, a rich history is in the blood of Tracy Bogler, who has carried the company's torch after his dad suffered a stroke in 2002. Operating a fleet of 125 long-haul tractors and 200 trailers - a mix of dry van and end dumps, Bogler said the company's time-honored reputation for reliable deliveries, coupled with controlling expenses have been the hallmark for the company's longevity.

Case in point is the company's recent decision to standardize on the Kenworth T660, matched with the PACCAR MX engine, rated at 455 hp, driven through an Eaton® UltraShift® Plus 13-speed transmission. The tractors are purchased through MHC Kenworth - Kansas City.

Tracy Bogler, president of Woody Bogler Trucking, is shown with one of the company's fuel-efficient Kenworth T660s equipped with the PACCAR MX engine.

"We're getting 4/10ths of a mile per gallon better with the T660 and MX engine over the other trucks in our fleet," said Bogler. "In fact, our best driver is getting almost 8 mpg."

The fleet runs in all lower 48 states. General goods are hauled in dry vans, while the end dumps haul clay to cement plants - clay is used as a 'sweetener' for bricks. Each tractor averages about 130,000 miles per year.

The fuel economy improvement means about a $4,000 savings per year, per truck. And, once the entire fleet is converted over to the T660, the math shows a fleet savings of around $500,000. To help maximize fuel savings, the company uses side skirts on its dry van trailers, plus wide-base tires throughout. APUs and fuel-fired heaters help reduce idling. The trucks also feature disc brakes and roll stability systems.

But it's the fuel efficiency of the PACCAR MX engine, coupled with the wind-cheating design of the Kenworth T660 that has turned heads at Woody Bogler Trucking. "We're running T660s with 72-inch AERODYNE® sleepers with our dry van fleet, while using a 62-inch FlatTop sleeper on the T660s hauling our 40-foot end dumps," said Bogler. "While management really likes the fuel economy numbers, our drivers really like their ride, creature comforts, and visibility. We recently received high praise from one of our veteran drivers when he told me, 'I can always tell you what I don't like about a new truck when I've driven it a bit, but I can't think of a thing I'd change on the T660.' 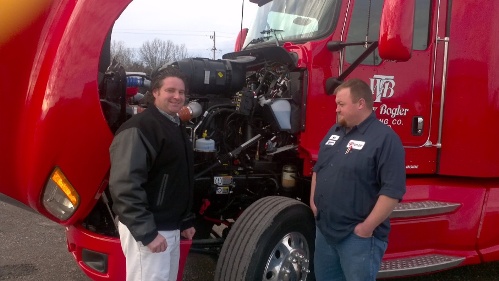 Looking under the hood of one of the fleet's fuel-efficient Kenworth T660s equipped with a PACCAR MX engine are, from left, Tracy Bogler, president of Woody Bogler Trucking; and Nick Wilburn, the company's director of maintenance.

"That told me a lot. And when we're entering a period of time when retaining drivers is critical to any operation, we were happy to hear the drivers love being behind the wheel of their Kenworths."

As for engine performance, Bogler had to decide on new power from the engines he used to run. "I rented a couple of tractors with different engines to compare performance and came away wanting the PACCAR MX," he said. "It's been a great decision. They're quieter and the power and torque are what we need. Plus the fuel economy is great. We also have the backing of MHC Kenworth. They've been great to work with and have come up with some great ideas on spec'ing. They're there for any service work we might need on the tractor or engines. Kenworth's over-the-road service network also is outstanding. Having confidence in your truck dealer is a big part of any trucking operation." 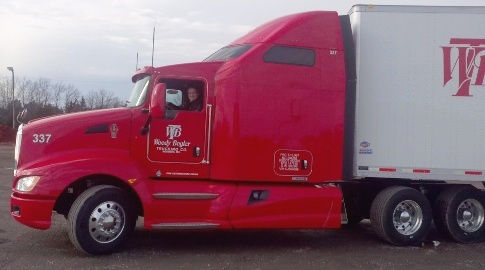 While Tracy Bogler looks at 2012, he's cautiously optimistic about the economy. "We had a better year in 2011 (revenues exceeded $30 million) than we forecasted, and we're expecting another solid year in 2012," he said. "We've been around for a long time - since the days of horse and buggy. I think my grandfather would be proud to see how his legacy has grown and endured."